Even though it has yet to launch, I’m very intrigued by the design and promise of the Avegant Glyph. The “Glyph” is a new headset (see Fig. 1), set to launch in early 2015, which integrates Avegant’s core “virtual retina display” technology into a headset. Even though the design of the Avegant Glyph looks similar to the Oculus Rift, there are some specific features that make the Glyph stand out as a very different and interesting product:

Main learning point: I can well imagine that the Avegant Glyph will be appealing to a whole new audience of users. Whereas the Oculus Rift is poised to attract an audience of gamers and people keen on virtual reality, the Glyph has the potential to reach out to more ‘everyday’ users who simply want a better visual experience than what they currently get on their smartphones or tablets.

It’s not that you’ll be able to easily blend into the crowd with your Glyph, but its main uses cases are likely to make it a lot more accessible and appealing to a wider audience. With an expected price point of around $500 it will be interesting to see what the uptake will be like, but I’d definitely love to get my hands on a Glyph when it comes out next year!

Fig. 2 – Outline of Avegant’s “Virtual Retinal Display” technology as used in the Glyph – Taken from: http://lifereallymatters.com/avegant-glyph-device-light-years-ahead-others/ 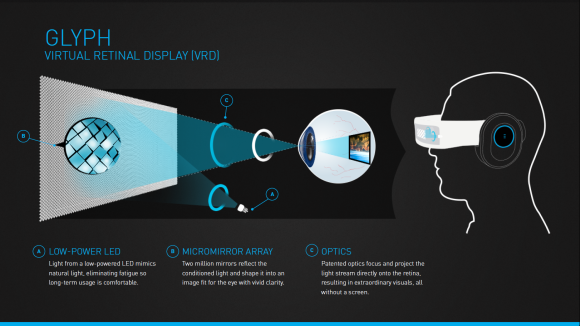